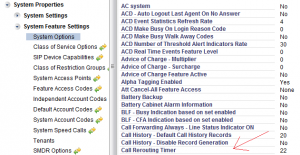 The COS “Call Forward – No Answer Timer” determines the length of time a call will ring a station before it is forwarded to the next programmed destination. The timer is reset each time the call is forwarded.

The System Option “Call Rerouting Timer” determines the length of time from initial call setup until the unanswered call is rerouted to the destination programmed in the Call Rerouting Second Alternatives form. The timer remains active through all COS-controlled call forward programming that may be activated at the destination station

With no call reroute 1st or 2nd alternate, then user-programmed forwarding (if any) takes over. However, user-programmed forwarding only applies to the PRIME number. In this case the amount of ring time on each instrument in a daisy-chained string of multiple forward hops will be determined by the COS of each set in the chain. With daisy-chained user-forwarding all forward hops must be prime numbers except the final destination can be a softkey.

Black magic comes into play when we begin dealing with extensions that are not prime (anywhere) and appear only as softkey appearances.

In the first place, key appearances that are softkeys only and do not have a prime appearance anywhere cannot be user-forwarded, period. Please note the period. They can only be rerouted via the call rerouting tables.